Barbarians At The Gate

As an old hand in the sovereign bond market I can understand - though in no way do I condone - "the market's" attacks on Greece and Ireland, even Portugal.  They are small countries at Europe's economic periphery who borrowed more money from foreign lenders than was good for them and thus left themselves wide open to speculative attack. 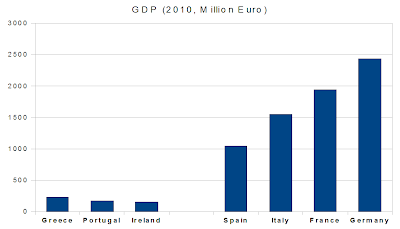 Pygmies And Giants
But now things are getting serious:  "the market" is attacking Spain, the world's eighth largest economy with a GDP of 1.1 trillion euro ($1.4 trillion). And "the virus" is spreading to Italy, Belgium and even to that paragon of financial probity, the most admired country in the world, Denmark.  Yes, Denmark.

Take a look at the Credit Default Swaps (CDS) charts below (all from CMA). 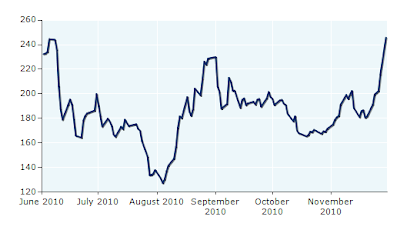 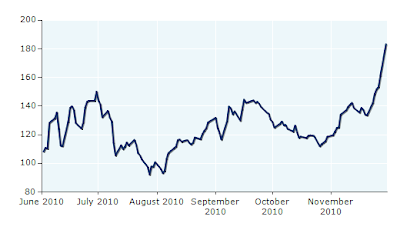 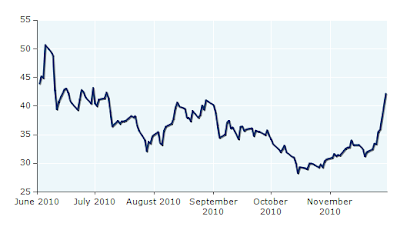 Denmark Sovereign CDS
(To make things clear: Denmark isn't even a member of the Eurozone! It's a full member of the E.U. but it still uses its own currency, the krona.  It's debt/GDP ratio at 42% is tiny.)

So what is going on?  Not to mince words, a concerted attack on the viability of the euro and thus on the very foundation of the EU itself.  The existence of a common currency for the world's largest economic block is a threat to the US Dollar Hegemony, i.e. anathema for those who wish to prolong the world as we knew it, a modified construct from the Bretton Woods era.

The barbarians are at Europe's gate, threatening to tear down and pillage what took nearly three quarters of a century to construct.  But it's not going to happen.  Like Hannibal's elephants ante Rome's portas, the big financial institutions that are behind this ill-advised campaign are themselves vulnerable.  They need massive amounts of cheap liquidity as fodder (only the Fed is supplying it at the moment) and risk-taking leveraged customers to piggy-back their positions (essentially, hedge funds).

They also rely on the complete absence  of meaningful oversight and regulation for credit derivatives, an inexcusable condition for which European politicians are entirely to blame.

What is the solution? Starve the beasts.

Bottom line: you want to play?  OK let's play.  But the rules of the game are  going to be for the benefit of the people, not to attack the people.  Because moral hazard should be, above all, moral.
Posted by Hellasious at Tuesday, November 30, 2010