The Bretton Woods agreement of 1944 established the preeminence of the U.S. dollar as the world's sole reserve currency.  The six decades that followed were the Unipolar Era for matters monetary, even after  Richard Nixon in 1971 unilaterally canceled the dollar's convertibility into gold.
The Maastricht Treaty of 1992 set forth the requirements for the creation of the euro, the European Union's common currency, which started circulating officially in 2002.  Thus began the Bipolar Era, a time of increasing concern for the United States since the euro challenged its monetary preeminence and threatened the very foundation of The Dollar Empire.
America's serial troubles with the stock market crash of 2000, the 9/11 terrorist attacks, the Iraq and Afghanistan wars and the housing and debt implosion which started in 2007 and is still ongoing, have  only added to the dollar's woes, since Americans have chosen to combat their intractable socio-economic problems with a mere placebo, an anodyne as it were.  To wit, the loosest possible monetary policy and increasingly massive quantitative easing, i.e. the printing press.
Naturally the dollar is losing value against the euro, prompting virulent  and under-handed attacks against the latter's credibility by American and allied economists, bankers analysts and associated flotsam and jetsam.  For example, the hugely disproportionate negative publicity surrounding Greece's public budget deficit - a laughable 0.25% of the EU's combined GDP.

Much more dangerous for American living standards, however, is the loss of the dollar's value against wheat, corn, copper, gold, oil and all other commodities.  The CRB index has zoomed back to its all-time highs not because of strong current or incipient demand from industrial users - the global economy  being still quite weak - but because the dollar is increasingly viewed with well-founded suspicion (see chart below). 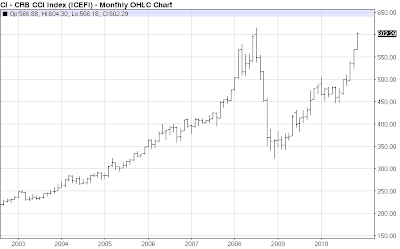 CRB Commodity Price Index
And that's where the third pole comes in: China has become the world's second largest economy, but when it comes to its currency it is still acting like a poor, underdeveloped country.  The yuan's hard peg against the dollar is not exactly a sign of national economic confidence, never mind pride.  It's like a 6 ft. tall teenager feeling so unsure about riding a bike that he keeps the side-wheels on.

An economy of such magnitude and global importance as China's cannot and should not use another country's currency, as it is effectively doing now through the yuan's peg to the dollar.  "It just ain't natural"- and what's more, it's clearly no longer in  China's best interest.  To use but one adverse example, what are the likely consequences of QE2 on the roaring Chinese property bubble?

It is time for China to completely un-peg its currency from the dollar and allow it to float freely, thus causing the world to enter the Tri-Polar Era.  From the perspective of balancing trade and geopolitical power, the existence of three major globally and freely traded currencies is more desirable than only one, and even better than two (the third will act as a buffer).