Ireland is about to become the second country in the EU to get a bailout (Greece was first). News and analysis  on the subject can be found everywhere, so I'll just throw in a few charts.
Until recently Irish public debt was quite low, around 30% of GDP.  But when the property and banking bubble burst things changed very fast.  Government liabilities exploded from 60 to 140 billion euro in less than three years (see chart below).

Chart: Central Bank of Ireland
Irish Government Liabilities
The main culprit of Ireland's demotion from prince to pauper is its failed banking system. Ireland boasts  a GDP per person that is second highest in the EU (in purchasing power parity terms) and yet... why did they go so massively in debt?  The private sector is in debt to the tune of some 350 billion euro (~175% of GDP), with home mortgages alone accounting for 110 billion (see table below - click to enlarge).

Home prices are now slumping across Ireland, but as the chart below shows the bubble was a long time forming. 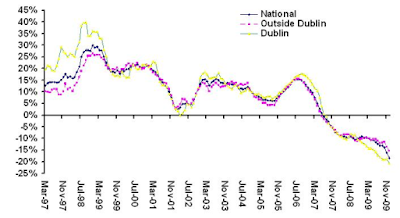 Chart: ESRI
TSB/ESRI House Price Index
So, what happened in Ireland?  In a word, hubris.  When it entered the European Union in 1973, Ireland was a poor agricultural society - indeed, the poorest country in western Europe.  In a determined effort to bootstrap itself, Ireland focused on education and started attracting foreign (mostly American) manufacturers of high tech equipment and services, offering ultra-low corporate tax rates as an inducement.  It worked marvelously well, turning the country from pauper to prince.
And it all went to their head in the end,  as it always does in the human race.  Dublin became a must-got-to place, a sort of Rome-in-the-Guinness-belt.  Home prices soared and kept on soaring, despite the fact that incomes could not possibly keep up with spiking prices.  Irish home buyers borrowed heavily and in turn their banks borrowed from abroad, particularly from Germany (note the imbalance between debt and domestic deposits in the table above).
It is estimated that German lenders currently hold about 150-180 billion euro worth of Irish liabilities, making the Irish Problem a very serious one indeed for the German financial system.   And it serves as a poignant counterpoint for Mrs. Merkel, the German Chancellor who has made so much political hay at home at the expense Greece, even though German banks hold only some 30-40 billion of Greek bonds.
P.S. A final prediction, for what predictions are worth: Europe is going to go the way of the US in bailing out its economy (-ies) and Mrs. Merkel is not going to make it past April 1, 2011 as Germany's Chancellor.
Posted by Hellasious at Monday, November 22, 2010