The Eurozone: A Family Snapshot

Given what is going on in the eurozone at the moment, I thought it would be nice to have a snapshot picture of it, circa 2010. 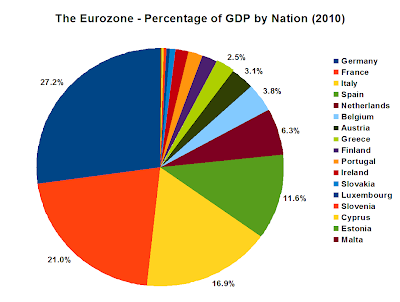 Data: Eurostat (2010)
Ninety percent of the Eurozone's GDP is produced by just seven countries
Before you reach Greece, number 8 on the list with a mere 2.5%, you are already up to 89.99% of total GDP.  That is to say, the "black sheep of the family" is a relative spiffle and its fiscal troubles should have been dealt with firmly and - most importantly - FAST.  It didn't happen, so the debt crisis has been allowed to fester and spread, threatening to become a serious systemic issue for the entire European Union.  A huge mistake for Europe's leaders, particularly Frau Merkel and Monsieur Sarkozi who should have known better.  Much better.
After the collapse of the USSR and America's Bush II, it seems that it is now Europe's time to go through its very own Era of Total Ineptness.
History is a harsh mistress whose cycles shall not be disturbed, indeed...
Posted by Hellasious at Friday, August 26, 2011