It's Time To Tax

The following story appeared in Reuters and made my stomach turn.


Some U.S. firms paid more to CEOs than taxes: study

"Compensation for the 25 CEOs with pay surpassing corporate taxes averaged $16.7 million, according to the study, compared to a $10.8 million average for S&P 500 CEOs. Among the companies topping the IPS list:

* eBay whose CEO John Donahoe made $12.4 million, but which reported a $131 million refund on its 2010 current U.S. taxes.
* Boeing, which paid CEO Jim McNerney $13.8 billion, sent in $13 million in federal income taxes, and spent $20.8 million on lobbying and campaign spending
* General Electric where CEO Jeff Immelt earned $15.2 million in 2010, while the company got a $3.3 billion federal refund and invested $41.8 million in its own lobbying and political campaigns.

Though the companies come from different industries, their tax breaks fall into two primary areas.

Two-thirds of the firms studied kept their taxes low by utilizing offshore subsidiaries in tax havens such as Bermuda, Singapore and Luxembourg. The remaining companies benefited from accelerated depreciation."

I can fully understand Warren Buffet's call for more (and better structured) taxation.  And how else can the U.S. ever get out from under the massive debt pile?


Look at the chart below.  If we merely revert to more historically "normal" tax receipts as a percentage of GDP (excluding social insurance which is a completely different issue) the extra revenue will come to some 4% of GDP, or $900 billion per year.  The federal budget deficit in 2010 was $1.17 trillion. 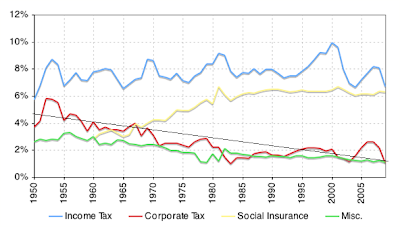 US Tax Revenue as a Fraction of GDP by Component

Posted by Hellasious at Wednesday, August 31, 2011