The Fed cut its target rate for Fed funds by 25 basis points yesterday to a range of 1.75-2.00%, just as expected. That’s not interesting.

What IS interesting, however,  is that it cut IORR and IOER rates even more, by 30 basis points. Those are Interest On Required Reserves and Interest On Excess Reserves respectively and are paid for deposits made to the Fed by banks.

Required Reserves is money/liquid securities that large financial institutions are required to deposit to the Fed  as a “safety” measure.  Excess Reserves are exactly that: extra money that banks CHOOSE to keep at the Fed, above and beyond amounts Required.

Given the ongoing abnormal situation in the repo market, the Fed is actively discouraging banks from keeping excess money on deposit with it, hoping they will channel it to the open money market instead, i.e. to the repo market.

Note that the Fed offered another $75 billion into the market yesterday and it was all taken up.  Despite the intervention rates remained significantly higher than normal, see chart. The Fed has announced it will be intervening again today.

But there is more to observe in this chart and table: look at the difference in rates for different collateral, the spread between MBS and Treasury has widened to almost 50 bp from almost zero recently.  That’s a very definite signal that riskier collateral is being “penalized”. 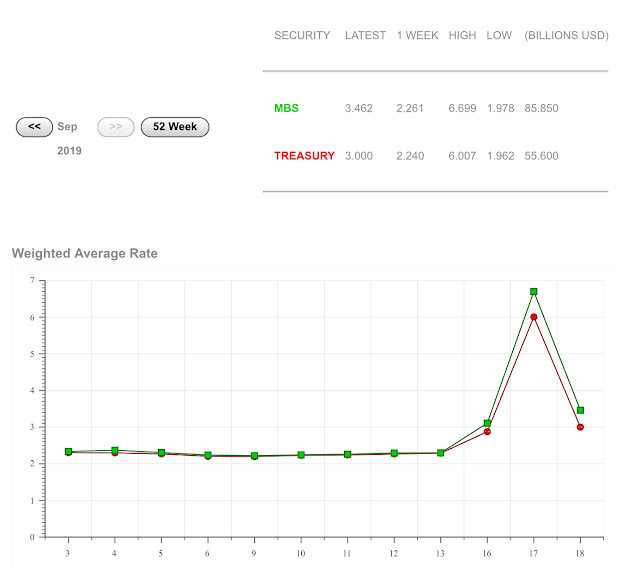 To me, it seems that some players are moving the Risk dial more towards the Off side by husbanding cash  All other “explanations” simply don’t hold water.

And just because when I get a bee under my bonnet.. it bugs the Hell out of me... I went back and looked at repo rate spreads during the period before and during the Great Crisis.  As you would expect, the money market had started sniffing credit trouble long before the bubble burst - see how Treasury and MBS repo rates diverged in 2007 and 2008? Remember that the big crash in the stock market did not happen until mid-2008. 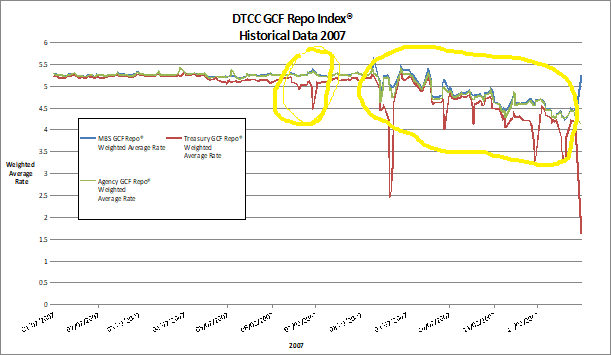 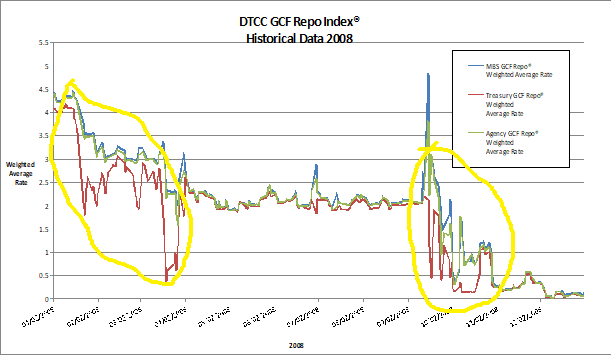 Posted by Hellasious at Thursday, September 19, 2019