The US repo market went haywire yesterday as overnight rates zoomed as high as 10% before the Fed stepped in with a cash injection of some $75 billion to calm things down.

Repo is the workaday business of funding a dealer's "book", i.e. the inventory of securities carried on his/her trading account. O/N repo is something no one thinks about - until something happens and then, believe you me, EVERYONE on the trading floor AND the boardroom is thinking about it.  It's like breathing: you take it for granted, until someone pulls a plastic bag over your face.

It is of crucial importance that (a) the money is readily available and (b) the cost of money is below the return on the inventory, aka a positive "carry".

If the money is not available at all, enough securities must be sold to reduce the inventory and raise the cash needed.  This is extremely rare, it feeds on itself in a vicious cycle and quickly leads to market panics e.g. it happened in October 1929 in the Great Crash with the evaporation of stock margin loan availability.  It also happened more recently with Lehman Bros. et. al.

The cost of money, i.e. the interest charged for borrowing money against Treasury, Agency, MBS or other high quality collateral is a key, day to day issue.  Trading securities operates with razor thin margins and borrowing costs are, by far, the single largest cost of doing business.  The spread between the interest earned on the bond inventory and the interest paid to finance it is crucial.  Obviously, a negative "carry" is anathema.

For the last two days O/N repo rates have moved sharply higher than normal.  No one REALLY knows why, other than the obvious: more demand for money than supply. There are lots of "explanations", like quarterly tax payments, Treasury auction settlement, etc.  Dunno, but they sound iffy to me: money does not disappear from the system, it just changes hands and places where it "resides" - it just goes from one bank to another (unless the Fed reduces excess reserves by regularly selling Treasurys, which it has been doing steadily since 2014).

Maybe it was just a "glitch", maybe some ops clerk left some tens of billions un-entered into the system (highly unlikely) and, anyway, the pressure had started the day before (see chart).

So, a more likely explanation is that someone(s) decided they did not want to offer their excess reserves into the repo market and probably "parked" it with the Fed. Who? Why? I note with interest that this started on Monday, i.e. the first day the market opened after the strikes in Saudi Arabia.  It could be a coincidence, of course...

PS The Fed has pre-announced that it will intervene again today with injecting repo cash.  Let's see how this plays out.  It's probably just a glitch....but if this goes on for more than a couple of days and the Fed is forced to make this a QE type operation it will mean that the Fed will be financing the government’s bond issues;  and that path ie printing money - leads to ugly ends: hyperinflation. 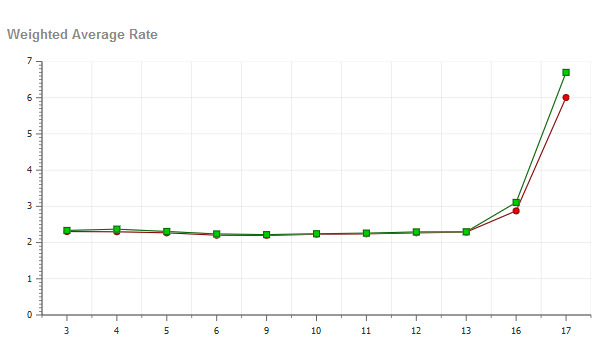 Posted by Hellasious at Wednesday, September 18, 2019