The Annihilation Of The American Middle Class

As Mr. Biden assumes office, the question remains: what produced Trumpism? Why does a huge 34% of all Americans still approve of Donald Trump, even after all his antics, his abject failure to handle COVID, the Capitol raid and two Impeachments? Is it just a passing personality cult or is it something much deeper and more serious? IMHO, it’s the latter. 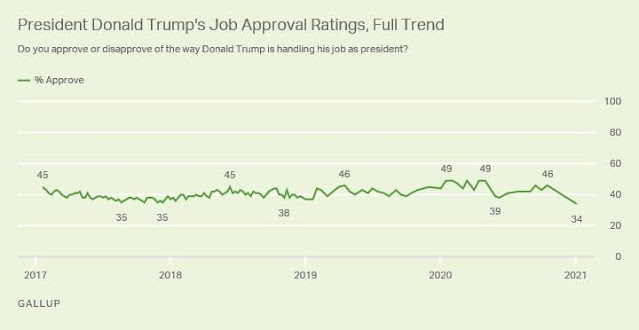 I believe Trump has touched a nerve with tens of millions of angry middle class Americans who have seen their relative living standards deteriorate sharply over the past 40 years. He is a symptom, not the cause of the deep American divide. Unlike most, I see this schism as almost entirely socio-economic (who has how much) instead of cultural-political (who believes what).  Let me put it this way: if your belly is full you don’t storm the Bastille (or the Capitol), not really.

Let’s look at some numbers.

Manufacturing employment in the US topped out in 1980 at nearly 20 million workers, accounting for 27% of all private sector employees.  It has since receded to just 12 million, a mere 9.3% of the private sector.  That’s a precipitous 66% drop in just one generation! 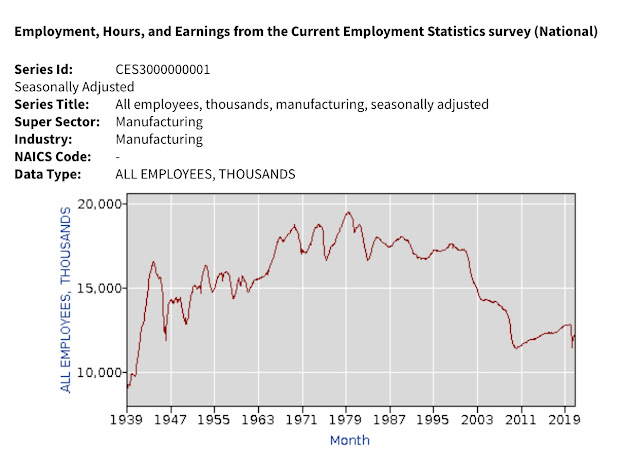 The Middle Class Train Has Derailed
The unionized factory floor served as the prosperity locomotive for America’s postwar baby-boom middle class. It has now derailed, its passengers left to find other means to get ahead in life. (Yes, productivity has risen sharply but that mostly means higher profits for the corporations, not much higher wages).
What has taken manufacturing’s place? One very big sector is Hospitality and Leisure (restaurants, bars, hotels, theaters, etc).  Since 1980 employment there has increased from 6.8 to 17 million (pre-COVID), or from 9% to 13% of all private employees. But that’s not all... 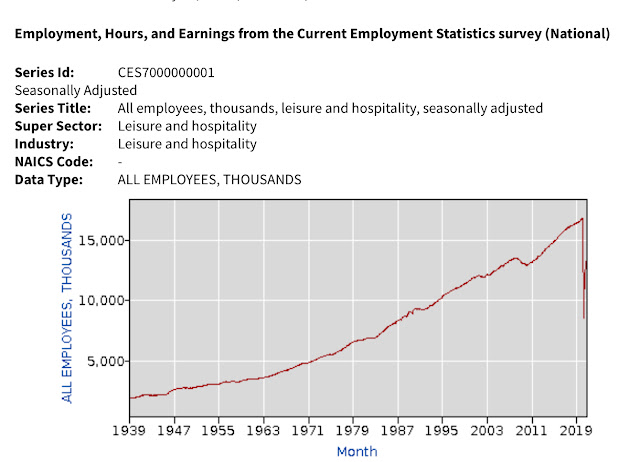 The Rise Of The Burger Flipper
Factory jobs were (and still are) much better paid and have better benefits.  They pay on average $29/hr vs $17/hr in hospitality and offer much better benefits (eg 84% of them have an employer sponsored pension plan vs. 33% in hospitality).
Here’s another statistic: in 2000 16% of factory workers were represented by a union vs. 4% in hospitality.  Today, those numbers are 9% and 3.5%, respectively.  Manufacturing employees have lost a lot of bargaining power whereas hospitality ones never had any to begin with.
In sum, the jobs that replaced factory positions are really, really bad. The American Dream road that lead straight from high school to assembly line is no more. Even a Bachelor degree is no longer a ticket to a relatively comfortable lifestyle, as seen in the next charts from a study by the Congressional Research Service. 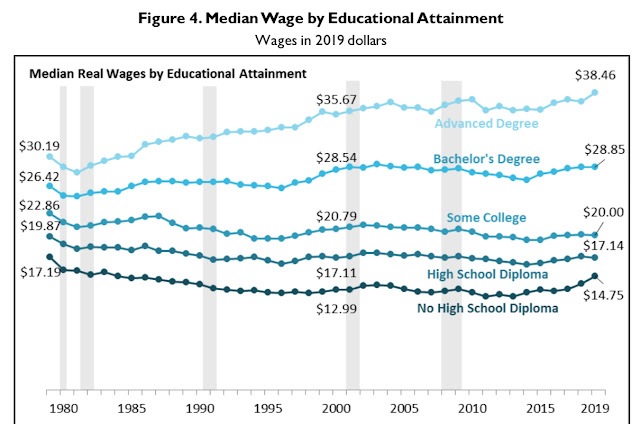 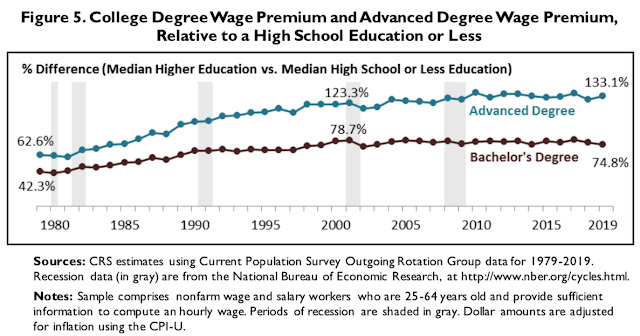 I recently read someplace that even American professionals (lawyers, engineers, accountants, etc) nowadays consider themselves relatively “poor” or “unprivileged”, which just goes to show how far the middle class has been squeezed.
In sum, Trump felt and unashamedly exploited a real social problem that has been brewing for decades.  Someone has to solve it, and soon, because he certainly didn’t...
Posted by Hellasious at Thursday, January 21, 2021