There was never a time when the title Sudden Debt was more apt than right now. Federal debt has exploded to 130% of GDP (Fig. 1) , and when Mr. Biden’s new $2 trillion program is added it will jump to 140%.  Such a debt burden may be acceptable for countries like Italy and Greece, or even Japan, but certainly not for the country claiming to be the Leader Of The Free World and issuer of the global reserve currency. 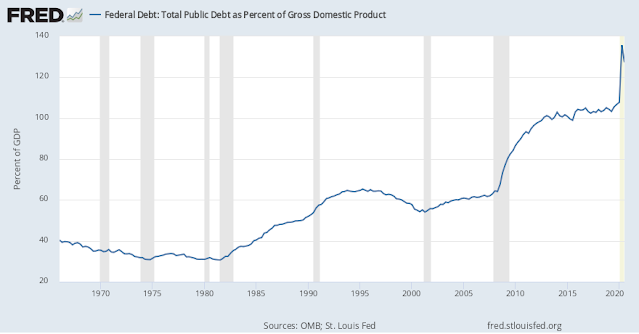 Talking heads are trying to underplay the (sudden) debt, claiming that what really matters is the annual cost of debt service, currently manageable because of near zero interest rates.  Indeed, the average interest rate on all government debt is now 1.7%, down from 2.4% last year (Figure 2). 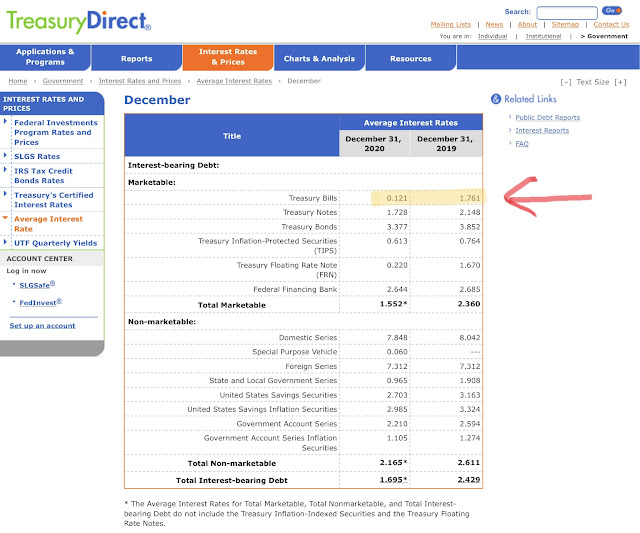 However, notice that this happened almost entirely because short term (up to 12 months) T-Bill rates have come down to near zero (red arrow above).  Outstanding marketable US debt is, in fact, very short term with its average maturity now down to 62 months or perhaps even less (Fig. 3). 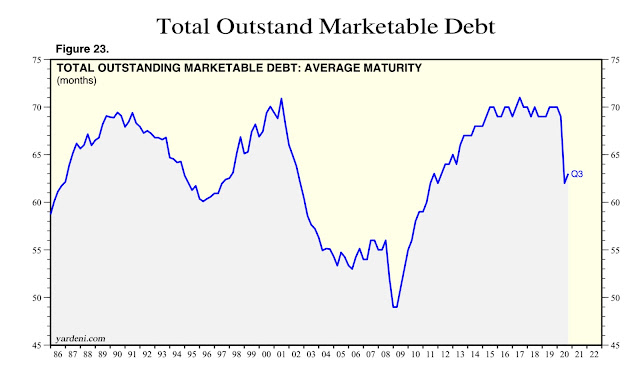 Figure 3
That’s because T-Bills and Notes up to 2 years make up $16 trillion of the total $28 trillion debt. Another $6.5 trillion are special issue bonds held by the Social Security trust fund. They are, indeed, very special issues: they pay interest at the average of all Treasurys with maturities over 4 years, but they are redeemable at any time at face value. So, in fact, their maturity is zero (Fig. 4). 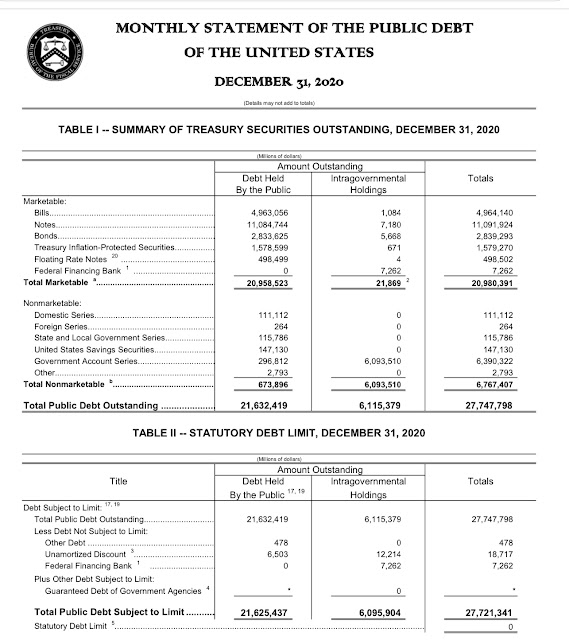 Doing just a bit of math we see that the real average maturity of the entire US debt is around 48 months as of 12/31/20. In other words, it’s very short term and thus very susceptible to refinancing risk. In 2019 the government’s interest expense was ca. 1.8% of GDP or 15% of all government revenue. As things stand today these figures are likely significantly higher and slated to rise even further due to Mr. Biden’s  additional $2 trillion debt package.

The Treasury is not financing all this additional debt by selling bonds (well, bills mostly) in the open market, of course.  They are purchased (or repoed) almost entirely by the Fed which thus prints 100% deficit money to be dumped by the proverbial helicopter onto the US public.  The Fed’s balance sheet has ballooned from $4 trillion to $7.5 trillion in less than one year and will go to nearly $10 trillion soon, when Mr. Biden’s $2 trillion are added (Fig. 5).

In case you are wondering, that’s the country’s central bank holding debt equal to almost 50% of GDP.  Is it sound banking to lend so much to ONE borrower?  Obviously, the Fed’s supposed independence has now gone completely out the window.

Which further begs the question: if the Fed is lender of last resort, savior of the financial system when it crashes... who will save the Fed?

Make no mistake: this has never, ever happened in the US before, not even during WWII which was financed with war loans, bonds and stamps sold to the public. 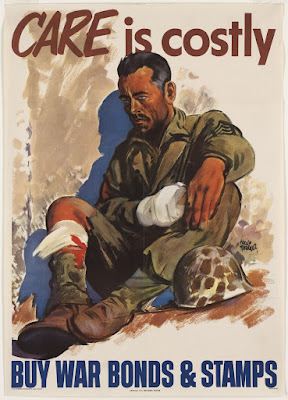 Bottom line: if the US economy does not come roaring back within just a few months, all of this huge deficit spending will raise serious questions about the country’s ability to continue meeting its debt obligations in an orderly fashion.  The dollar will weaken, interest rates will go up and the vicious cycle very familiar to over-indebted countries shall take hold in the US.   End of Empire.
Unthinkable? I think not.