Is The US Headed For A Debt Trap?

A debt trap is a situation where a country’s excessive debt load creates a vicious economic cycle of very low or negative credit expansion, high real interest rates and very weak growth or prolonged recession.  The cycle feeds upon itself, becoming self-perpetuating until something radical happens to break it (eg bankruptcy).

We have seen a recent full-cycle example in Greece, bankruptcy included. Italy is a mess and France is not  very far behind.  If it wasn’t for the ECBs massive QE operations the very existence of the euro would be in serious question. Another example is Japan, which went through 30 years of economic stagnation after its debt/bank/real estate/stock market  bubble burst in 1989. Iceland, Ireland, Portugal, Spain and Cyprus also come to mind.

Still, none of the above were/are issuers of the world’s reserve currency, therefore the negative impact on the global economy was/is manageable, if not downright negligible (certainly so in the case of Greece).

However, as US debt soars to unprecedented highs we now need to seriously consider the possibility that America could fall into a debt trap. The probability (P)  of it happening may be relatively small right now (although higher than ever), but the negative consequences (C) of such a development are enormous.

So, we really need to pay attention to the equation:  R = P x C

where R is the consequences-weighted risk of a US debt trap.

It’s a bit like the risk inherent in huge earthquakes - they don’t happen too often, but when they do they are truly catastrophic; so, it is prudent to take necessary measures well in advance.

Let’s examine the US debt situation.

First up, the annual cost of debt service (interest alone) on all US government public debt as a percentage of GDP has increased substantially from 1.25% in 2015 to 1.75% in 2019 (Chart 1). During 2020, sharply lower interest rates were offset by higher debt and lower GDP numbers, so the debt service  jumped further to around 2.50% of GDP, the highest since 1998.  Note, however, that interest rates were much higher back then; for example, 6 month Tbills were around 4.50%.

Chart 2 shows the interest expense of the US government as a percentage of GDP (Y axis) for various average interest rates (X axis).  It assumes $30 trillion in debt and GDP of $21.5 trillion 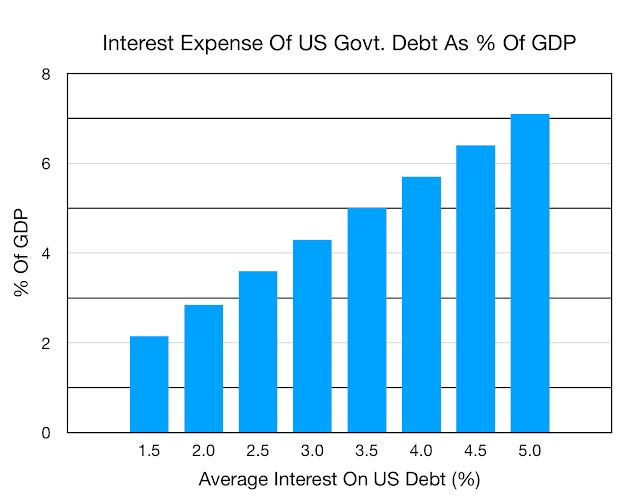 What is more interesting, however, is interest expense as a percentage of total government revenue. Assuming the same revenue as in pre-COVID 2019 ($3.5 trillion), we get Chart 3. 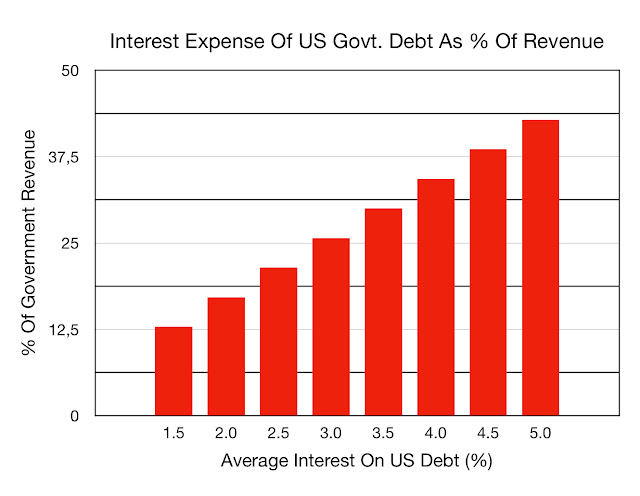 Currently, even with near zero interest rates for Tbills, the US has to pay around 15% of its total revenue in annual interest.  Since the government is running a deficit, this expense is not actually “paid” - it’s just added to the debt load in the form of issuing more bills and bonds.

It is quite obvious that even a small increase in interest rates back to more “normal” levels, will rapidly escalate the annual debt service cost and create a dreaded vicious cycle leading to unthinkable insolvency - if revenues don’t increase, that is.

Therefore, it is clear that the US government needs to raise revenues significantly and must do so immediately.  Fortunately, corporate and wealthy individual income tax rates are near all time lows and could be raised significantly.  Other taxes should also provide additional revenue: increased capital gains and wealth taxes can be instituted with immediate effect, particularly with financial assets now at record high level.  The wealth gap is so wide now (see previous posts) that targeted tax increases will be very popular with the vast majority of tax payers (for once, “sock the rich” will not be just political hot air - it will also raise substantial revenue).

Back to the R formula: the probability P of a US debt trap is rising fast, as can be seen from Charts 1-3 and the consequences C are pretty easy to imagine (very large).  Therefore, risk R is also growing fast and must be reduced immediately.

Posted by Hellasious at Thursday, January 28, 2021