Lest We Forget, Oh Debt!

This blog was started in order to record the huge amounts of debt being created in the US and many other countries back in the mid to late 2000s.  In turn, this debt fueled a massive bubble in real estate and other financial assets which rather quickly resulted in a crash.

The world hasn’t been the same since, as central banks and governments intervened in unprecedented fashion to save banks, investors/speculators and the wider economy. Even some PIGS were “saved”, some more than others (Greece was disgracefully forced to default on its debt and went into a state of prolonged penury which persists to this day).

So, central banks are now anointed  Salvator Economia, no longer limited to safeguarding monetary probity.  Instead, they have usurped the role of elected politicians, wielding enormous fiscal power via the printing press.  Think of this alone: each month the Fed increases debt, mostly federal, by $120 billion. That’s $1.44 trillion of added debt per year - and Congress does not even get to vote on it! Inflation, the stability of the dollar? Congress, ie the voting public, is not consulted in the least. Just a dozen or so unelected bankers decide on what is the largest ever addition to the people’s debt burden in History.

And this is happening all over the world, not just the US (China is more circumspect, very pointedly).  Global debt has now spiked to $285 trillion, or 355% of global GDP - chart below.  A lot of this burden on the “real” economy  has been added in just one year, during 2020 (red line)  - and it keeps growing at a record pace in 2021, too.  That’s the very definition of Sudden Debt. 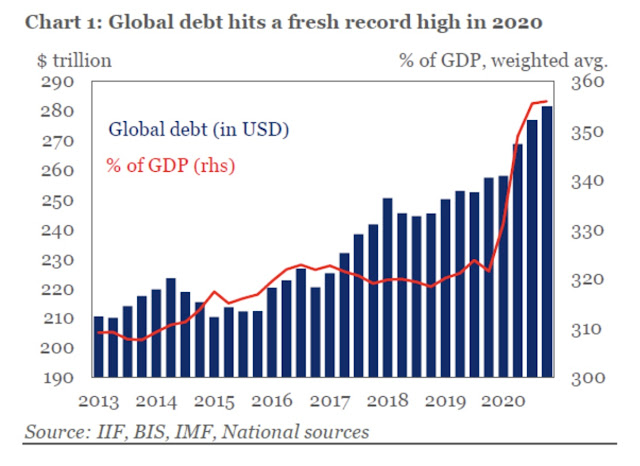 Governments and central banks are furiously trying to throw the wool over peoples’ eyes by claiming there is nothing to worry about - just as “analysts” did  back in 2006-07.  Only this time the burden is even  greater and asset valuations even more extreme and delusional in nature (cryptos, meme stocks, NFTs).

All the while, the chorus of serious financiers warning of impending trouble keeps getting bigger (Mr Bury of Big Short fame just warned of “country-sized” losses), but no one with the authority to do something seems to be listening.

To paraphrase Kipling, “lest we forget, Oh debt” (from his poem aptly called Recessional). In this case it may end up as Deeply Depressional, I’m afraid.

PS Wink to AKOC and his poetic references 😄