Today,  a chart comparing the Treasury yield curve changes in just the last 21 days (chart below). 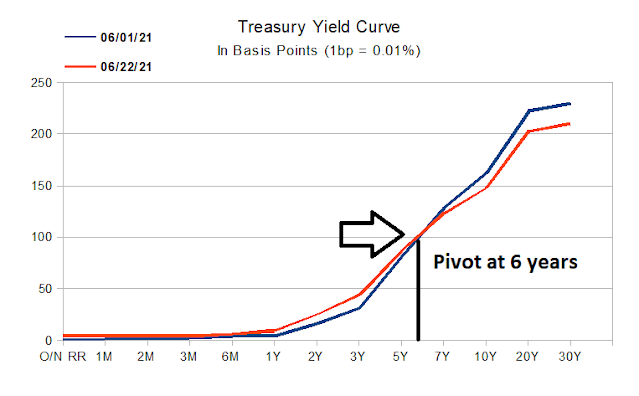 The curve has flattened out, seemingly only a bit, pivoting at exactly the "belly" point of just under 6 years which, by the way, is the average maturity of the entire US federal debt.

However, the linear scale of the Y axis above does not show the real magnitude of the change - so here's the same chart in log scale. 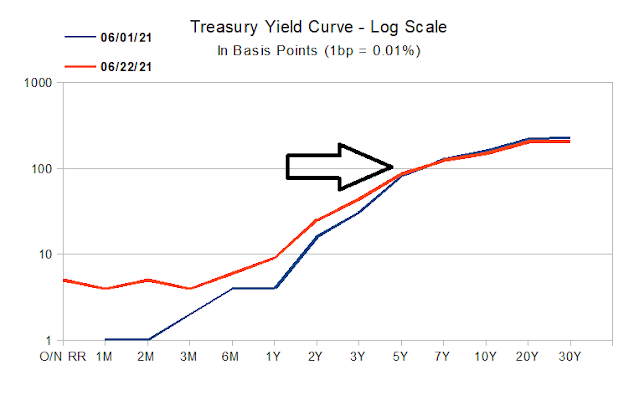 We can immediately grasp the significant rise in short term interest rates in the money market end of the yield curve,i.e. exactly where the "real" economy operates (trade financing, letters of credit, etc), and where financial markets get almost 100% of their day to day funding for their securities' inventory.  Those costs just jumped by 5-8 basis points.  I know it doesn't seem like a lot but, in fact, it is significant.

Here's an example: a broker/dealer in Treasurys, MBS, or corporates will almost always "carry" his inventory, also known as his "book", by borrowing in the money market, usually overnight (or tom-next to account for settlement dates).

So, the dealer is carrying a book that yields, say, an average 1.0% and until last week it was being financed at 0.01%, for a net profit of 0.99%.  As of today, this cost has jumped to at least 0.06%, for a net of 0.94%, i.e. a 0.05% rise in his/her carry cost has resulted in a profit decline of 5.05%. And that's on a gross basis; when you look at the result on a dealer's equity capital return the effect could be much greater, depending on his book's leverage. Given that dealers routinely employ 10x and often 20x leverage, the negative effect on his firm's equity bottom line could be painful.

That's a pretty simplistic example, of course. Dealers employ all sorts of hedging strategies to protect from market risk, to an extend. All of those strategies, however, come at a cost which reduces gross return, so no matter how you slice it a funding cost increase will always lead to lower carry profits, all other things being equal.

Savvy professionals keep a hawk eye on two markets, in that order: (a) the money market (ie interest rates and liquidity for up to maximum 1 year) and (b) the note/bond market.

No matter what Mr. Powell says, therefore, what REALLY matters is what he does, observed and understood not by the hoi polloi, but only by the "worker bees" in the front lines.