The Mother Of All Bubbles - Are We In For An Unprecedented Crash? (Part III)

Continuing from yesterday’s post, let’s put together all six points and apply them to our dominant Permagrowth socioeconomic model. (If you haven’t read my posts before, Permagrowth is my term for the incessant expansion of everything, from population and consumption to money supply and debt.)

Permagrowth is much more than an economic model. Above all, it is a way of life where “more is better” has become rigid and unquestionable dogma. It comes closer to the unshakeable faith in Heaven and Hell dominant in 16th Century Catholic Europe than, say, the economic theories developed by Adam Smith, Keynes, Friedman, or even Marx. In other words, Permagrowth is now a religion. If you don’t believe me, ask anyone why they buy the latest iPhone.

The Pope sold indulgences so that sinners could get into Heaven by paying a steep price in cash. Likewise, Permagrowth devotees are fundamentally convinced that everyone will be “saved” with more money, higher prices for assets, more wealth on paper. Our sins of raping the environment, depleting precious habitats and unleashing natural disasters (eg COVID) are all washed away by … higher stock or real estate prices.

Then came Martin Luther’s Ninety-Five Theses and within just one day in Wittenberg the world changed. 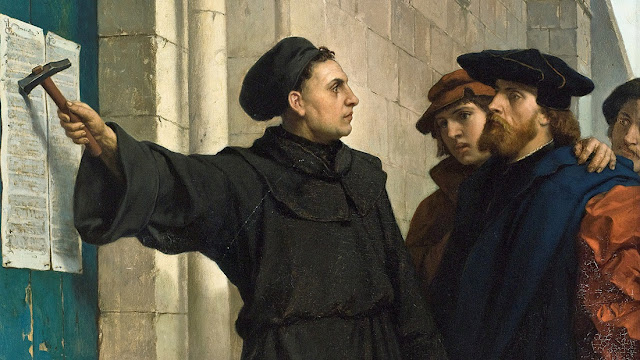 Only Faith In God Decides Who Is Saved, Not Money

(Only You Can Change The World, Money Can’t 😜)

Change can occur with lightning speed when conditions are right. But it comes as a shock to those lulled into apathy by what they perceive as “normality” in the period immediately preceding change. It was “normal” for the Catholic Church to sell indulgences since the Pope ex cathedra was infallible and God’s sole representative on Earth. It was “normal” for the USSR to produce thousands of nuclear warheads but not enough toilet paper. Dogma and apathy trump common sense every time - until they don’t.

How “normal” is Permagrowth today? My thesis is that it is utterly untenable, that constant expansion has become a runaway reaction that can no longer be contained in its reactor vessel. Think Union Carbide and Bhopal, India writ on a global scale. Its deleterious products are spilling over: not only climate change and habitat destruction, but socioeconomic and geopolitical dislocations are just as rampant. And it’s happening fast - very, very fast.

I could give dozens of examples, but if you’ve been reading this blog you can easily identify them. The most ardent acolyte of the Permagrowth religion is the stock market, particularly in the anything-goes US.

I’ll be focusing on that in the next post.

Posted by Hellasious at Friday, September 17, 2021