The Mother Of All Bubbles - Are We In For An Unprecedented Crash? (Part IV)

Some years ago a gentleman I worked with at an investment bank had a saying: “It’s only money”. John K. was at least 20 years my senior, having started his career in the early 1960s. At the time, I thought he was merely being sentimental, as in “money can’t buy you love”.  It took me a while to realize that John was being literal and was referring to markets.

Market prices are marginal, ie they are determined by incremental, instead of total, supply/demand and, since they float on a sea of money they rise and fall along with its ebb and flow. John was right: it’s only money. Emphasis on only.

It’s even more so with stocks, since unlike, say, wheat, they have no tangible underlying physical demand and are therefore priced at multiples of other markers like earnings, sales, assets, etc. You can’t eat stocks or, these days, use them as wallpaper; furthermore, their prices are derived from a consensus view of the future, since just about everyone ignores the past.

Therefore, tongue in cheek, how are stocks any different from Papal indulgences? After all, you pay a given price for a stock today because you believe it to be a fair representation of the future. We call it a discount mechanism, but it is merely one more article of faith in the Permagrowth religion. The more you believe, the more you pay.

But, wait a minute… what about “it’s only money”? Show me the money, cries the unbeliever - so voila: the connection between money/more money/much more money and share prices is obvious, as you can see in the charts of M3 and S&P 500. 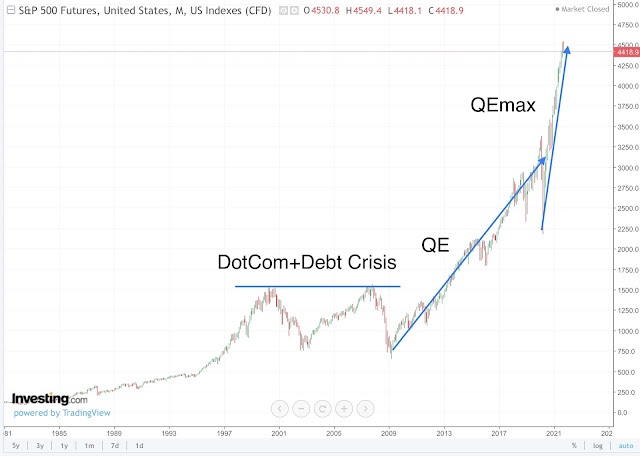 Lest we forget, I’ll end today’s post with a reminder: money is debt. More money is more debt. Much more money is much more debt.
Why the reminder? Two reasons:
And there you have it…. I may write one more post in this series to include the other elements mentioned in the second post, not sure yet.

Posted by Hellasious at Saturday, September 18, 2021