The Mother Of All Bubbles - Are We In For An Unprecedented Crash? (Part V)

On Part II of the series I laid out six concerns that could produce an unprecedented crash. Number two:

Speed: computers have made everything faster. Communications, transactions, manufacturing, transportation, logistics, decision making. Reaction to anything is nearly instantaneous.

I would like to expand on this a bit more, though from a non-technological perspective.

While algorithmic and high frequency (flash) trading are still very prevalent in today’s markets, I’m not looking at them today. Instead, I want to focus on the one thing that seemingly travels faster than light: thought, including the subcategories of memory and feelings. (Yeah, ok, the brain, too, works via electrical impulses, but you get my point).

In my opinion, most everyone active in markets today, amateur or pro, individual or institution, knows (ie thinks, feels) that the US stock market is currently driven by momentum alone, completely detached from all fundamentals such as price to book, price to earnings, dividend yield, etc. The basic reason everyone mentions when asked “why buy or own stocks right now?” is: “because they are going up.”

You don’t have to go far for proof, just look at the wildly popular SPACs. People are willing to subject themselves to an immediate loss of their capital (due to SPACs origination fees, commissions and expenses) to invest in nothing  tangible, just a promise that whenever the SPAC merges with whatever, the result will be something that will go certainly up. Speculation on momentum, and nothing else.

Since everyone knows this, that the market is hanging on momentum alone, how quickly will everyone jump ship once momentum shifts? How quickly will the thought of exuberance transform to panic?  Remember, retail speculators today don’t even have to call a broker to place a sell order (he/she may change a speculator’s mind), it’s all a button on an app on a phone. There are no brakes in the system.

Today, market information is disseminated instantly to all, and the thoughts/feelings it produces, ranging from greed to panic are also transformed into action instantly. The classic KAL cartoon below sadly belongs to another era…there’s too much of a delay. 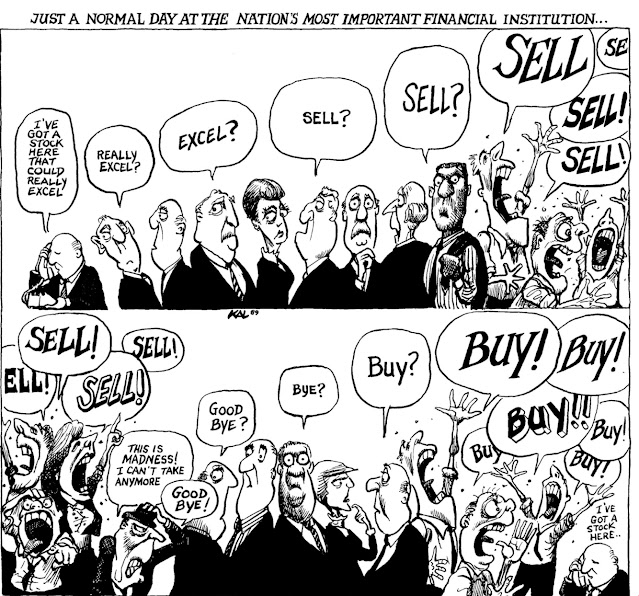 All right, maybe an old cartoon isn’t exactly convincing to you. How about what happened today to a Chinese property developer’s stock trading in the Hong Kong exchange, down 95% in one day - see chart below. Fast enough transmission of fear for you? (On the heels of Evergrande… sounds like Souza’s USMC march, doesn’t it?) 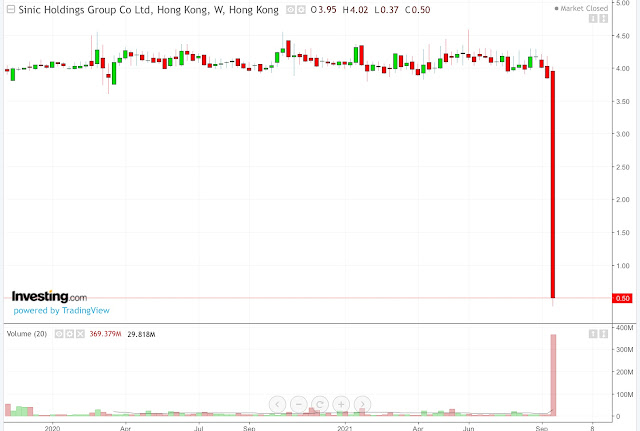 Posted by Hellasious at Monday, September 20, 2021