The Crisis, Part Two (Plus Addendum)

View everything that has happened so far in the global economy as The Crisis, Part One. What is still to come is Part Two - and it's going to be worse. Why? Because we are going to get slammed with the effects of rapidly rising unemployment where it hurts most: consumption makes up 70% of GDP. No job, no spending.
Look at the chart below (click to enlarge): employment (blue line) is dropping at the fastest rate in 60 years. Meanwhile, total population is still rising at over 1% per year. 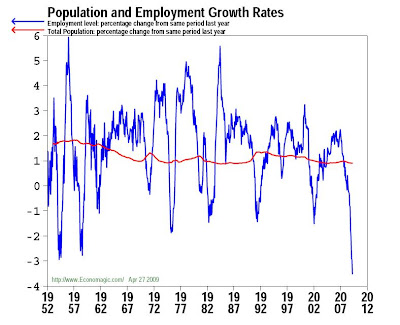 And here's the government's increasingly pressing Keynesian dilemma: borrowing trillions to salvage the financial sector from its own perfidy makes it all that harder to go on a public spending program to boost jobs and incomes in a counter-cyclical fashion.

But isn't all this new "bail-out money" created by the Fed and Treasury going to eventually find itself in the pockets of Mr. and Mrs. Average Joe? No, it won't - and AIG is the perfect example why: the $182.5 billion in public money it received to cover its CDS-related losses was immediately recycled back into the Wall Street trough. Goldman Sachs, JP Morgan, et. al. are not exactly hurting and in no way contributing to balanced income re-distribution. Even if Wall Street bonuses are "slashed" by 50% (and they most certainly aren't) it still means a huge chasm in income disparity.

Let's see things for what they are, right now:

McDonalds (black) vs. US Banks (yellow)
Bottom line: our previous economic "growth" was a debt-induced mirage and has now disappeared. Current global economic policy measures are aimed almost 100% at salvaging the bankrupt and discredited (literally) financial sector. This will prove a huge and costly policy mistake that will quickly backfire as the real economy continues to adjust downward to its "natural", lower debt state.

The Conference Board yesterday announced that its reading of consumer confidence for the month of April jumped a very significant 13.2 points, from 26 to 39.2. On the face of it, this sounds very encouraging - until we dig a little deeper: the rise was almost entirely due to a jump in the Expectations Index, up almost 20 points. The Present Situation Index was almost unchanged, as were other sub-indexes that measure current business conditions and job prospects. Hope dies last?

As I said in the previous post [scroll down, see point (b)] we are in the midst of a manufactured feedback loop that is aiming to boost peoples' morale. The stockmarket's recent performance is a big factor in all of this, no doubt. An entire generation of Americans (and plenty of others, too..) has grown up with the religious belief that green "up" arrows on the Dow scrolling below their CNBC screen is - somehow - a good thing for them, even if they own zero stocks and bonds.

For them, I suggest they should instead look at this chart, below: continued claims for unemployment insurance as a percent of the civilian labor force, i.e. the real economy, right now. Unfortunately, it doesn't look good; if we reach the 5% level of 1975, then we are looking at an additional 2 million continuing benefit claimants, on top of the record 6.1 million currently.

And if things get significantly uglier (remember, "worst crisis since 1929"?), say to the tune of 8%, then we will have to deal with 12.5 million people claiming unemployment benefits. Truly ugly.

So, if the real economy doesn't turn around in the current quarter there will be hell to pay; from a psychological perspective alone, dashed expectations are very powerful negative motivators that will induce people to really go into their shells.

And that's when the Crisis will go into its most virulent, Part Two phase. Just in time for the swine...
Posted by Hellasious at Wednesday, April 29, 2009