Before today's post, a nod to regular readers "dink" and "Debra" who mentioned a Renaissance painting of a couple in fancy dress oblivious to the looming storm brewing behind them. Dink could not remember it and Debra could not immediately identify it, but I can. 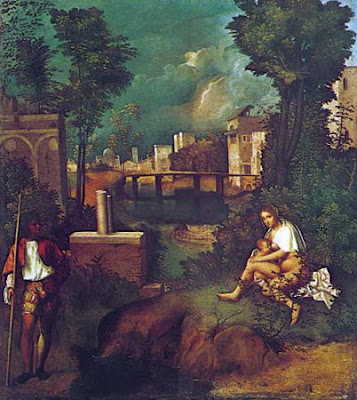 The Tempest, oil on canvas by Giorgione, c. 1505 (Galleria dell’Accademia, Venice)
On with today's subject..

The mining industry is notorious for its terrible environmental record. Not only do mining operations pollute during the extraction period, runoff from tailings, open pits and dumps continues to do serious damage for decades after the mine is closed. In many cases the pollution will continue forever. Reclamation obligations are set out in the original pemitting process but they are often prefunctory and far from comprehensive enough to restore the environment to its original state.
But even so, some mining companies just take the valuable ores out and then declare bankruptcy, leaving behind a mess for the local communities to deal with. Needless to say, the owners and directors of the mining companies don't live "downstream" of their mess.

The same happened with the debt industry: the entire food chain that evolved around it - brokers, originators, packagers, servicing companies, lawyers, investment bankers, rating agencies, hedge funds, private equity firms - flourished mightily as the rich loan seams were mined to exhaustion. As the mine started drying up, new extraction methods were dreamed up and applied to a clueless population, to eke out potential interest streams and to stuff them into ever more opaque "vehicles". Regulators? C'mon... we're talking Bush administration here, with the de-regulation process having already started in the Clinton years by the likes of Greenspan (blinded by technology), Rubin (financial industry insider) and Summers (insufferable know-it-all wonderboy).

Liar loans, NINJAs, Alt-As, CLOs, junk bonds - a whole panoply of toxic debt was chopped up, mashed into amorphous chunks and fed into even more opaque CDOs, CPDOs, SIVs, synthetic CDOs.. Credit swaps were brought in and used like arsenic in gold mining: they made possible the extraction of "value" from even the poorest quality source rock, like sub-prime mortgages.

And then the debt mine finally went stone "dry" - as all resources ultimately do when they are squeezed mercilessly be they mines, oil wells or fisheries - leaving behind a whole lot of of aptly-named toxic waste to pollute the global village. But the vastly enriched mining company operators most definitely do not reside anywhere near the disaster zones they created, geographically, or income and wealth-wise.

The financial industry's bonus system of pay is (was, hopefully) based on immediate results and guaranteed that no care was taken to safeguard the future viability of the debt that was being mined. As an executive, I can tell you that the attitude in the business has always been "what have you done today". Heavy emphasis on today, quickly forgetting yesterday and entirely disregarding what effects our current actions may cause tommorrow.

It's no coincidence, then, that the last decade has produced income and wealth disparities not seen in the US since the robber baron era. The richest got ultra rich while everyone else remained stuck in the doldrums. According to the latest Survey of Consumer Finances (pdf file) conducted by the Federal Reserve, in 2007 the top 10% in the income percentile earned on average eight and a half times as much as the middle 40-60%: $400,000 annually versus only $47,000. By contrast in 1992 the top 10% earned five and a half times as much. The disparity has widened dramatically - and keep in mind that this is in constant 2007 dollars (see chart below, click to enlarge). 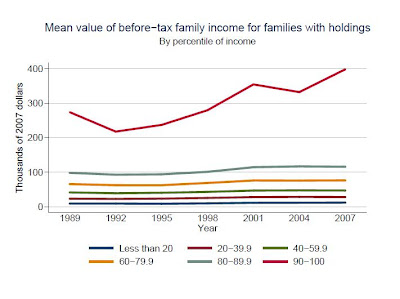 Likewise for wealth. Average net worth for the top 10% exploded upwards more than doubling to $4,000,000 while the "bottom" 90% went nowhere. 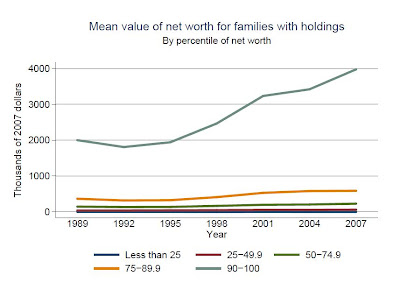 Net Worth by Percentile

Isn't it amazing? Nine out of ten American families, 90% of the population, is plainly in the relative "bottom". Literally, in the pits!

And here's the amazing part: because of what we are doing right now, i.e. saving the financial industry and the entire associated food chain from its own toxic waste, there is a real prospect that this "bottom" 90% of Americans will shoulder the vast portion of the salvage cost.

I say only "prospect" instead of "certainty" because things may and, indeed, should turn out differently. After banks are stabilized and markets thaw out (signs are there already) it is imperative that the Obama administration does the following:

a) Kill the shadow banking system - it's already withered, anyway. Start by once again distinguishing between regular banks and investment banks, i.e. re-imposing a modern version of the Glass-Steagall Act that was abolished by the Clinton administration. Strengthen the regulatory powers of all relevant public institutions (SEC, OCC, FRB, etc.).

b) Demand that shareholders and creditors assume the burden of keeping their financial companies afloat as public money is gradually withdrawn. This means capital injections in the form of new share issuance (i.e. likely dilution for existing shareholders) and accepting debt rollbacks/haircuts (i.e. losses for creditors). The objective is to reduce the legacy costs of the current Fed and Treasury operations to the taxpayer (i.e. the 90%) to the greatest extent possible.