Today's post will feature mostly charts, and some will be a bit repetitious from previous "Grecian" posts.  Unlike the US, Greece is a small country with fewer parts to examine, so repetition is inevitable.  I will attempt some insights, nevertheless.

Between 2008-13 Greece suffered an economic meltdown of epic proportions as GDP plunged 25%, unprecedented for a country not at war. It's been been going sideways ever since.

Why? Greece saw its share of  the "Sudden Debt" bubble between 2000-2010, when loans to the private sector doubled as a percentage of GDP, albeit from low levels when compared to other Western nations.

Public debt soared, too, and the budget - always in deficit - went into deep red, reaching over 15% of GDP.

While the rest of the world found its post-bubble footing and markets eventually reached new highs, Greece did not.  The performance gap between S&P 500 and ASE is eye-popping.

The reason for this lag is twofold:
Having told this tale of Woe it is my opinion that Greece is now rapidly changing for the better and has - finally - become an Opportunity.

Why? As is common after prolonged bear markets, people ignore positives and choose to remain apathetically focused on negatives only.  This creates a gap between current asset prices and their  value as calculated by normalized P/E ratios, book/tangible values, ROAs, rent yields, etc. 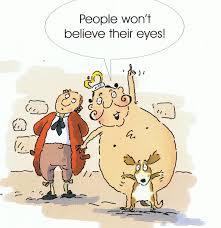 To put it another way, this is the exact reverse of Andersen's tale about the Emperor's clothes: after years of seeing him go about naked, his subjects ignore it when he shows up in new breeches. For those more inclined to quantum physics, your reality exists as you expect it.