I just came across a very interesting scholarly paper from the Yale International Center For Finance. It examines London's infamous 1720 South Seas Bubble, which saw share prices in shipping, trading, insurance and finance companies rise as much as 800% in a matter of weeks, only to collapse within days. Chart 1 below is from the above mentioned paper. 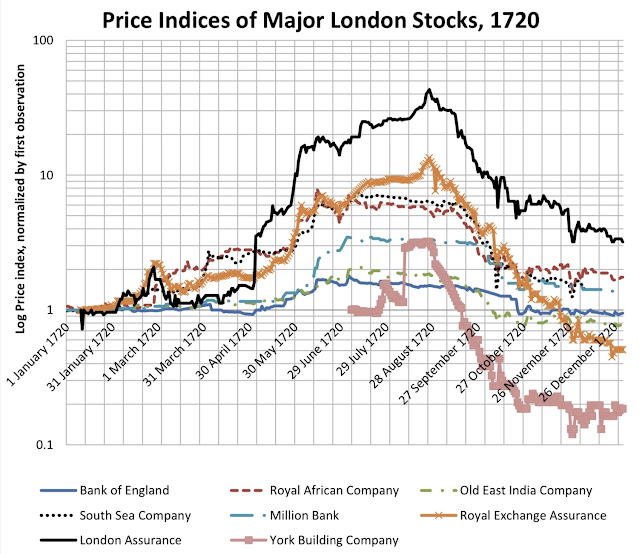 At the very top, the public's gullibility and folly had reached such heights that money was raised, and I quote, “For an undertaking of great advantage, but nobody to know what it is”. This quote may, in fact, be apocryphal, but it accurately reflects what was going on in that crazy time.

Yet, as you may read in the Yale paper, there was a “story” to the South Seas speculative frenzy, an otherwise rational driving force of innovation, new horizons and prospects for highly profitable trading ventures.  Innovation was then - and still is - a major factor in initially capturing the interest of informed investors.  What happens next, however, is crucial: if this interest expands to involve traders, speculators and the wider public, it can become a frenzy resulting in a bubble.

Chart 2, also from the paper, shows the massive overvaluation of  shares in “innovation”  New World companies vs. more traditional Old Economy ones. 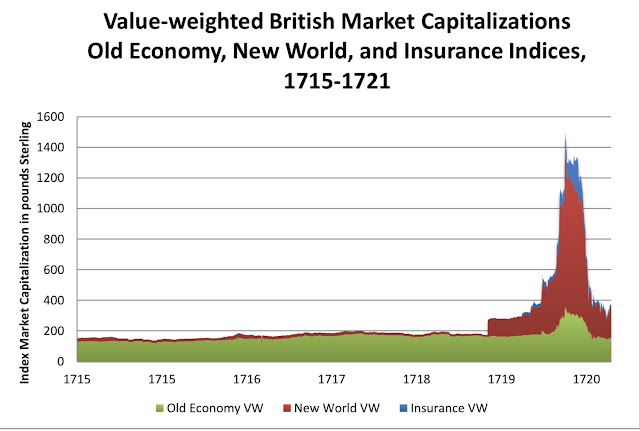 Investing in innovation is, by definition, more novel and intellectually challenging than the established “old economy”.  It is best understood, at a rational, scientific level, by “intelligent” investors who can evaluate the business dispassionately.  However.... scientists are rarely, if ever, conversant with the  “animal spirits” part of markets and can very easily get blindsided by them. Case in point, the genius Sir Isaac Newton speculated and was bankrupted by the South Seas bubble. 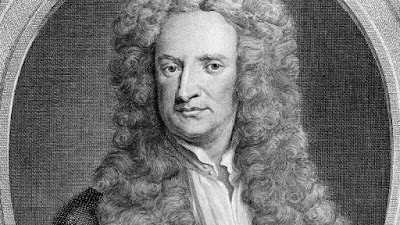 Innovation, in the form of a “story” which captures the public’s imagination, has been present at every bubble and subsequent crash: the Panic of 1901 (railroads), the Crash of 1929 (radio, aviation), the crash of 1987 (LBOs, junk bonds), the dotcom collapse in 2000, the crash of 2008 (subprime lending, credit derivatives, financial engineering).

Are we in for a repeat today?  You be the judge: Chart 3 is a comparison in share price performance between "innovative" Tesla and "old economy" Toyota Motor, the world's largest automotive manufacturer.  In just 12 months, Tesla soared 900% versus Toyota's 0%.  Tesla now has a market cap of $752 billion and Toyota $195 billion. Annual revenues: $32 billion and $280 billion, respectively.

Now, I'm not even remotely suggesting anything other than using those two companies as examples - and nothing else.  As always, please don't take this as advice, prediction - or even suggestion - for the individual companies and their stocks.

If you want investment advice here are my two cents' worth: please consult a professional, NOT chatrooms, social media, influencers and the like. Or blogs.